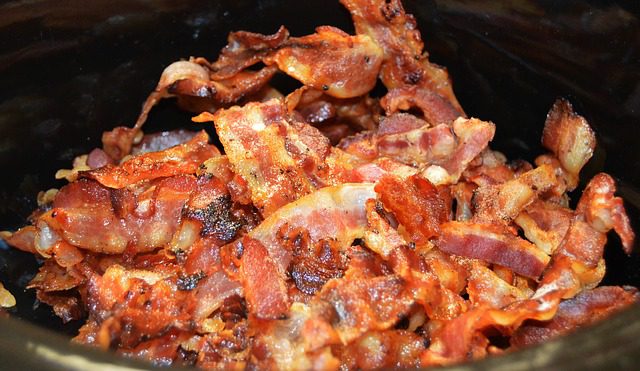 Can a diabetic eat bacon?

Bacon is a hard to resist, and extremely tempting dish that is loved by many. But for a diabetic, things are not that smooth. Before you eat that fat-streaked strip of perfectly processed smoky, and salty meat, you need to evaluate it on several factors such as carbs, calories, and GI index. According to health experts, people who are diabetic, bacon is the No. 1 bad guy for your breakfast.

Does that mean, you can’t include it in your diabetes meal? You can, but only in less amount. So, here is all about impact of bacon on the health of a diabetic, and how to eat it in less amounts and still relish its wonderful taste.

In comparison to women who ate less amounts of red meat, women who ate red meat on a frequent basis were seen to be highly susceptible to the chances of development of Type 2 diabetes. People who eat bacon, processed form of deli-style meats, and hot dogs, were linked with a 43% more risk of getting Type 2 diabetes. Let us see a few more complications associated with eating bacon.

One of the major reasons why this red meat “Bacon” negatively impacts diabetes is due to its high iron content. Processed meats, and red meat are relatively high in iron content that may constitute to diabetes. Studies performed in the past have shown that there is a link between Type 2 diabetes, and high levels of iron. Women who consumed more of red meat in their diet were 46% more susceptible to getting diabetes.

The additives, preservatives, and chemicals used for processing meats, that includes nitrites, nitrates and other chemicals are created during processing of the meat. It makes a person insulin resistant, and increase the complications in diabetes.

Another reason why Bacon should be avoided in a diabetes meal is that it causes surge in blood sugar levels. Unhealthy levels of blood glucose can make your health condition troublesome. A healthier alternative to this meat is an unprocessed form of red meat.

To control your blood sugar levels, and risks of Type 2 diabetes, it is advised to avoid consumption of processed meat, and Bacon in your breakfast. When seen at the long-term safety of processed meat rich diets, it was found that it can lead to colorectal cancer, and kidney damage.

Another important reason to eliminate Bacon from your diabetes diet is that it contains saturated fat in large amounts. Due to which inflammation can be caused in the body. This can in turn result in various types of side effects in a person.

People with diabetes already have increased chances of cardiovascular disease, that gets increased when you eat high-fat meats. This elevates the risks of getting heart ailments than an average person.

How to eat Bacon to prevent spike in blood glucose?

Sausages, and sizzling bacon really smells great, but they have high levels of salt, cholesterol, carcinogens and fat in it. This makes them unhealthy choices, mainly for diabetics. To help it get properly digested, you need to combine it with fiber rich foods such as oatmeal, fruit, or high fiber toast.

If you really crave for an indulgent breakfast, you can opt for other healthy meat substitutes like tofu and a few other plant-based proteins. These foods share a similarity with Bacon in terms of taste especially when you add them into any other dish. Turkey, and chicken can also be a low-fat addition to your diet, but you should note that they are high in salt content.

Before you try any meat alternative, it is important to check with your doctor about the salt content, and its impact on your overall health.

Not all tasty dishes have their place in diabetes meal. Same is the case with bacon. Those sizzling strips of Bacon taste wonderful, but they can also give rise to potential complications in diabetes such as heart disease, and high blood pressure. It has high salt, and fat amounts that are present naturally in it.

That is the reason why bacon is listed as a forbidden food. Understanding how it affects your health, and controlling its portion size will help you enjoy it without unbalancing your blood sugar levels. Previous: Can A Diabetic Eat Carrots? Next: Can A Diabetic Eat Tomatoes?