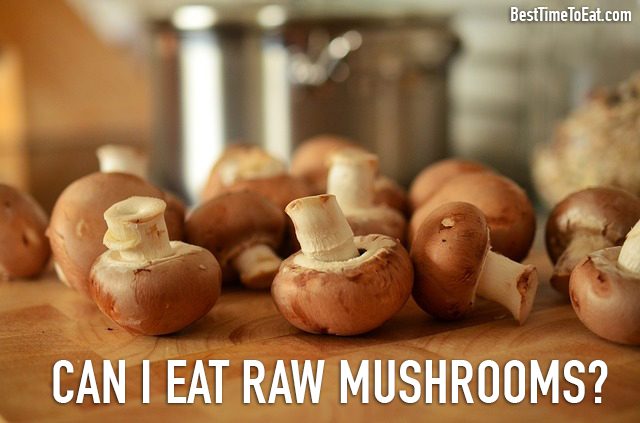 Can I eat raw mushrooms?

You see raw mushrooms may contain a naturally occurring toxin called Agaritine which gets dissipated if heat is applied. This toxic compound can be found in every day supermarket variety white button mushrooms as they belong to the Genus Agaricus family of mushrooms.

So what can it do to you and how does it even matter?

Agaritine is carcinogenic by nature, which means it has the potential to cause cancer by messing with your DNA. The absolute way to loose Agaritine is when you boil raw mushrooms in water for close to an hour which makes the mushroom lose as much as 88% of its Agaritine content. Microwaving the mushroom for 30 seconds can make it loose up to about 51% of Agaritine and 60% if microwaved for 45 seconds. In a study conducted with mice which were fed with Agaritine induced water for the mice’s entire lifetime, found that they weren’t affected at all and found no occurrences of cancer in the mice.

A team of Swiss researchers studied how much Agaritine a typical mushroom eater might be exposed to and found out that over the course of their lifetime Agaritine could potentially lead to one instance of cancer per 50,000 life times. In other words even if it’s a carcinogen, it’s a very weak one at best. It was also derived that mushrooms provide one with more cancer preventive compounds than cancer inducing ones.

Agaritine also breaks down when mushrooms are refrigerated or dried or just stored for that matter, the amount of Agaritine found in the mushroom you bought in the store has reduced by the time it reached the super market shelf from when it was picked. So the mushrooms you bought or have stored in your fridge have probably only a fraction of Agaritine anyway. The amount of goodness that mushrooms provide just offsets the very negligible or non-existent risk they might pose to you.

Why it’s still better to cook your mushrooms:

It’s still better if you cook your mushrooms, well yes I just said they are safe to eat raw but you might not want to do that if you want to get a mushroom’s full nutritional value. All mushrooms are essentially indigestible if they are consumed raw because of their tough cell walls composed of Chitin.

So in order for you to be able to absorb the goodness that mushrooms provide, it’s better if you cook them to release the nutrients. Individuals with digestive problems are also advised to cook mushrooms than eat them raw as it becomes easy for their bodies to process it. Mushrooms are also carriers of bacteria and cooking them kills these bacteria.

So, if any arguments need to be made on why mushrooms are better consumed cooked, then it’s those two reasons. As I said in the beginning, it’s safe to eat mushrooms raw but if you want to digest them easily and extract their nutrients efficiently, then its best to cook them. There is no concernable risk in eating raw mushrooms. Next: Best time to eat zucchini