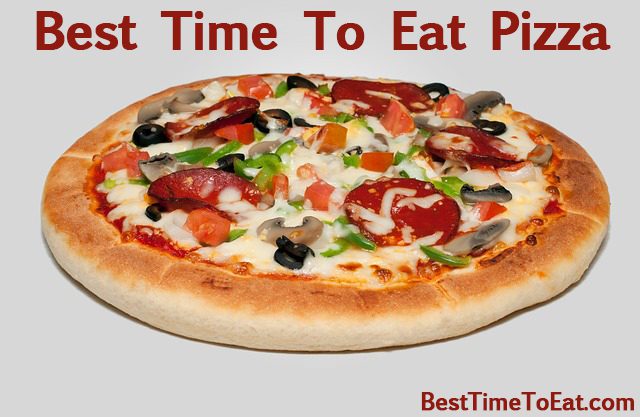 Best time to eat a Pizza

Pizza is a dish that originated in Italy but currently, it is one of the most famous dishes in the whole world. It consists of a yeasted flat round base of dough that is baked in an oven and is typically topped with cheese & tomatoes. Various other toppings are added with tomatoes and cheese in the pizzas like meat, fish, vegetables and condiments. Pizza is considered to be a junk food due to its high calories and fats. A pizza contain about 266 calories and 10 grams of fat including a saturated fat of about 4.5 grams in every 100 grams of pizza consumed. Thus, one needs to be extremely careful while the consumption of pizzas to lessen the harmful effects of the high calories and fats which can simply be done by knowing the optimal time for its consumption.

For this one needs to be very particular with time while consuming pizzas to eliminate the harmful effects to a great extent. Therefore, it becomes extremely important to know the best time to eat a pizza. First and foremost, it should be remembered that if you eat pizza after some exercise or workout session, they torch in more amount of fat in the body than eaten three hours after the session of exercise or workout. Researchers have revealed the best time for the consumption of saturated fat so that its negative effects can be significantly reduced. Saturated fats in the pizzas become even worse when is ate alone other than anything else in the diet. This is because chronic inflammation is determined by the type of the saturated fats eaten in the diet and the time of consumption. Hence, it is best to consume saturated fats in the early morning and the worst time would be to eat at night. The saturated fats are capable of producing the highest degree of inflammation when it is consumed late in the night which in turn increases the risk of various metabolic diseases such as Type 2 Diabetes and obesity. So, it is clear that pizzas should be consumed early in the morning or at the time of lunch and not after that.

Also read: When is the Best Time to Eat Bread?

Pizzas also contain a high number of calories so it requires time to complete the overall metabolic activity. Thus, it is recommended to consume pizzas for breakfast, morning snack or at the lunch – time since during the day one is physically more active than at the night. Thus, consumption of pizzas during the day – time helps to reduce the weight gain for its consumption and the individual would have a much better metabolic activity at the day – time. It is not advisable to consume pizzas or any other similar diet with high calories and fats as an evening snack or at the time of the dinner which would significantly reduce the negative effects of consumption of those products. Thus, it is very well understood that the best time to eat pizzas is in the morning or afternoon and not after that. Next: Best foods to help you build muscles