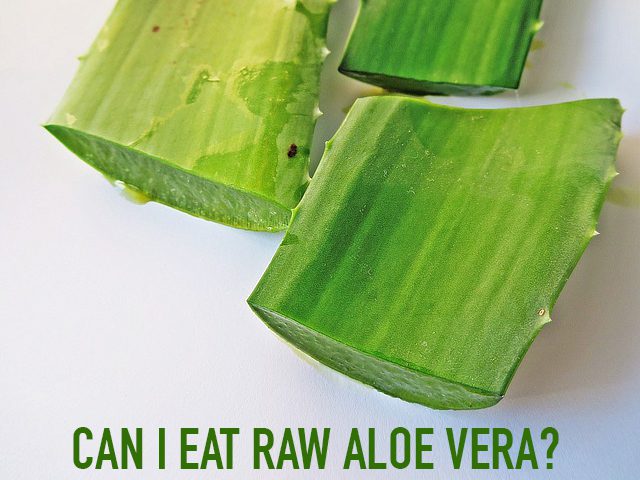 Can I eat raw Aloe vera?

Most of us know Aloe vera as a natural skin and hair treatment ingredient. However, very few people actually pay attention to the fact that this succulent plant has a host of other benefits to offer for our overall well being. Even South East Asians, who have been using the leaves of his plant in their cooking for centuries, often have a very little idea of the slew of advantages they regularly gain from aloe vera. Recently, a renewed interest in healthy living has seen an upsurge in the tropical succulent. Aloe can actually be consumed either cooked or raw, with the raw form giving the more obvious benefits. In this article, we will discuss the possibility of eating this plant as it is.

Which part to eat?

The most commonly eaten part of the plant is the thick, cacti-like leaf. While the leaf is sometimes eaten with the green skin intact, it might not make for a pleasant taste, thanks to the fact that the skin is tougher than the rest of the plant, and might have a pungent and bitter taste. The commonest practice is to peel away the thick skin to reveal the soft, clear meat inside, which acts as a container for the clear, slippery gel that looks very much like gelatin.

As a health drink

The gel found inside the leaves of the aloe vera plant can be consumed as it is, squeezed into a container. However, the taste might not be appealing to all, thanks to the plant-like smell that not all palates will be familiar with. In most cultures, it is consumed after being mixed with some water and a generous helping of herbs. Sometimes, lemon is also used to mitigate the earthy smell and add a pleasant taste to the whole preparation. It is to be noted that none of this procedure takes away from the benefits you are accorded by the aloe vera gel.

The aloe vera gel can also be consumed as a smoothie. Take the clear meat and the gel, and mix them with some fruits or vegetables or both to make for an extremely healthy drink to sip upon on the go. Add a sprinkling of sesame seeds and some nuts to make it an even healthier and tastier preparation.

As a salad dressing

Yet another method of eating aloe vera gel is to use it as a dressing on cold salads. Be it a fruit salad or a vegetable salad, or even a cold pasta salad, a smattering of aloe vera will only make it healthier and tastier. The gel is slippery in texture, and does not have a very distinct taste of its own, which makes it an ideal dressing that will not take away the characteristic flavors of the salad, and can be used much like you would use seaweed.

Also read: Can I eat a raw avocado?

There are multiple benefits of eating aloe vera gel raw. It is great for the skin and the hair, and is also said to have properties that help in preventing and fighting free radicals that lead to the birth of cancer cells. They reduce inflammation, which makes them extremely useful in soothing joint and arthritis aches. However, it must be kept in mind that these leaves also have natural laxative properties, which is why it would be unwise to eat them regularly and in copious quantities, unless you suffer from chronic constipation. Previous: Can I eat a raw avocado? Next: Best time to drink tea