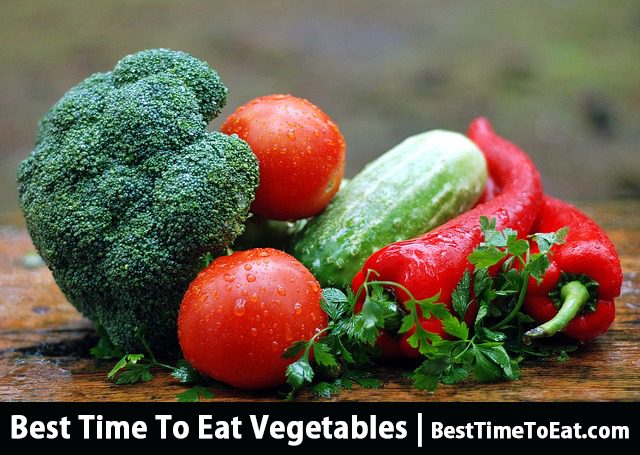 Everything has a proper time and should be occurring accordingly to give its best. Even the foods are not an exception from this right moment. It is not only the foods as a whole, but there are some of the best timings when the consumption of fruits, vegetables, and other food items should ideally take place. This might sound a bit awkward, but this is the truth. Vegetables are an important part of the diet and should be consumed on a regular basis to get the most out of them.

Eating Veggies in The Right Time:

Researchers have revealed that the ways are vegetables and fruits are produced and stored have far-reaching effects on their health benefits. Hence, to get the most health value out of these vegetables, they should be consumed at a proper time. The production and storage have great impacts on its nutritional value and benefits of health. Studies have proved that the vegetables have the capability to respond to light signals and alter their inner biology in several ways that might affect the health value and insect resistance. So, it is best to eat vegetables after storing them under lighted conditions.

Enhancing the Nutritional Value of Vegetables:

It is recommended as per the researchers that we should necessarily store the vegetables in alternate cycles of light and darkness. After this storing, the best time comes when we can finally cook the vegetables and eat them so as to enhance their nutritional value which is excellent for health. The vegetables after their harvesting are over; they remain alive for quite a few days. They even have the capacity to manipulate the level of chemicals that is present inside them. The main function of these chemicals is protection. These chemicals protect the vegetables from being eaten by the insects and other creatures. Most importantly, some of these chemical substances that help in the protection of the vegetables have anti-cancer effects. The chemicals have the power to prevent and even cure cancer up to some extent. Hence, this becomes the most appropriate time of eating the vegetables.

The presence of these chemicals was initially found on cabbage, but later it was found that there are several other vegetables that have this type of similar chemical effects. The other vegetables were carrots, spinach, sweet potatoes, blueberries, lettuce, and zucchini. Thus, it was proved after the detailed studying of the vegetables that eating them at a particular time of the day to get the most benefit out of them. But doing this might be a great challenge, and hence the researchers came up with a different idea of doing the same without facing a high level of challenges to get the most out of the vegetables by consuming them at the appropriate time. They suggested that the harvested vegetables should be frozen and preserved at some of the specific times of the day when the nutrients and other useful phytochemicals present in them are at their peak performance level. The consumption of the vegetables should essentially occur at that time during the day.

List of vegetables and their right time to eat: Previous: What Is The Perfect Time To Eat Blueberries Next: The Best Time To Eat Jaggery